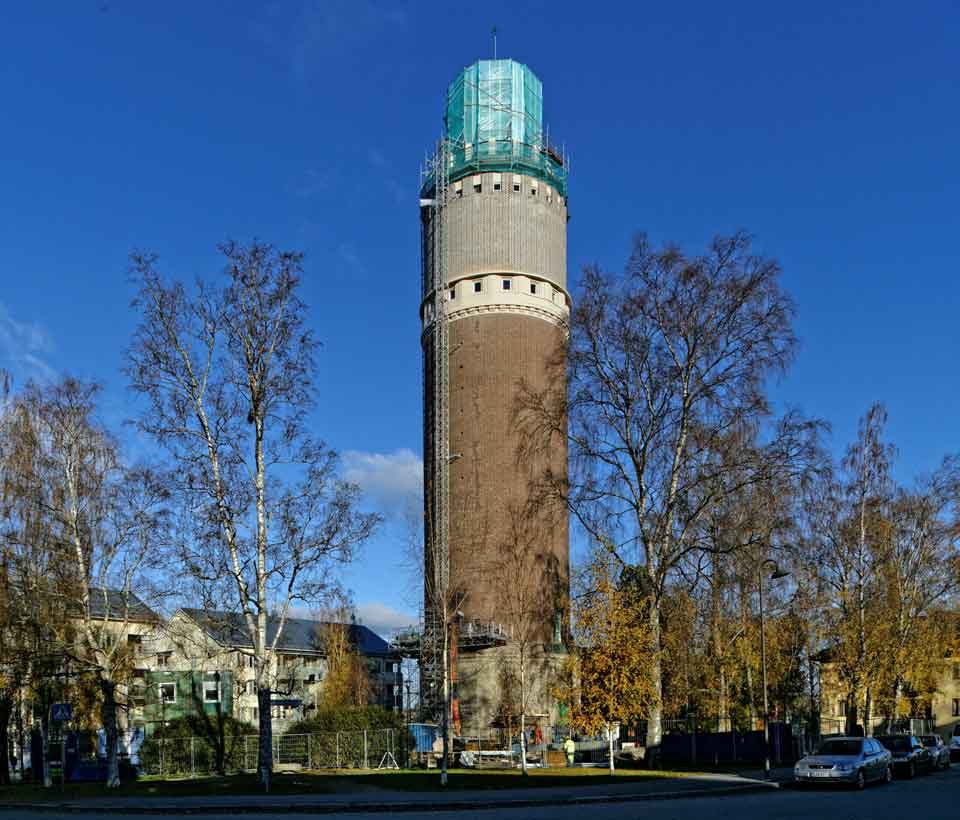 The historical brick water tower in Pietarsaari was taken out of use for several months at the end of May 2014. During the extensive renovation, the water supply network has been left without a high level water tank to equalise the pressure. 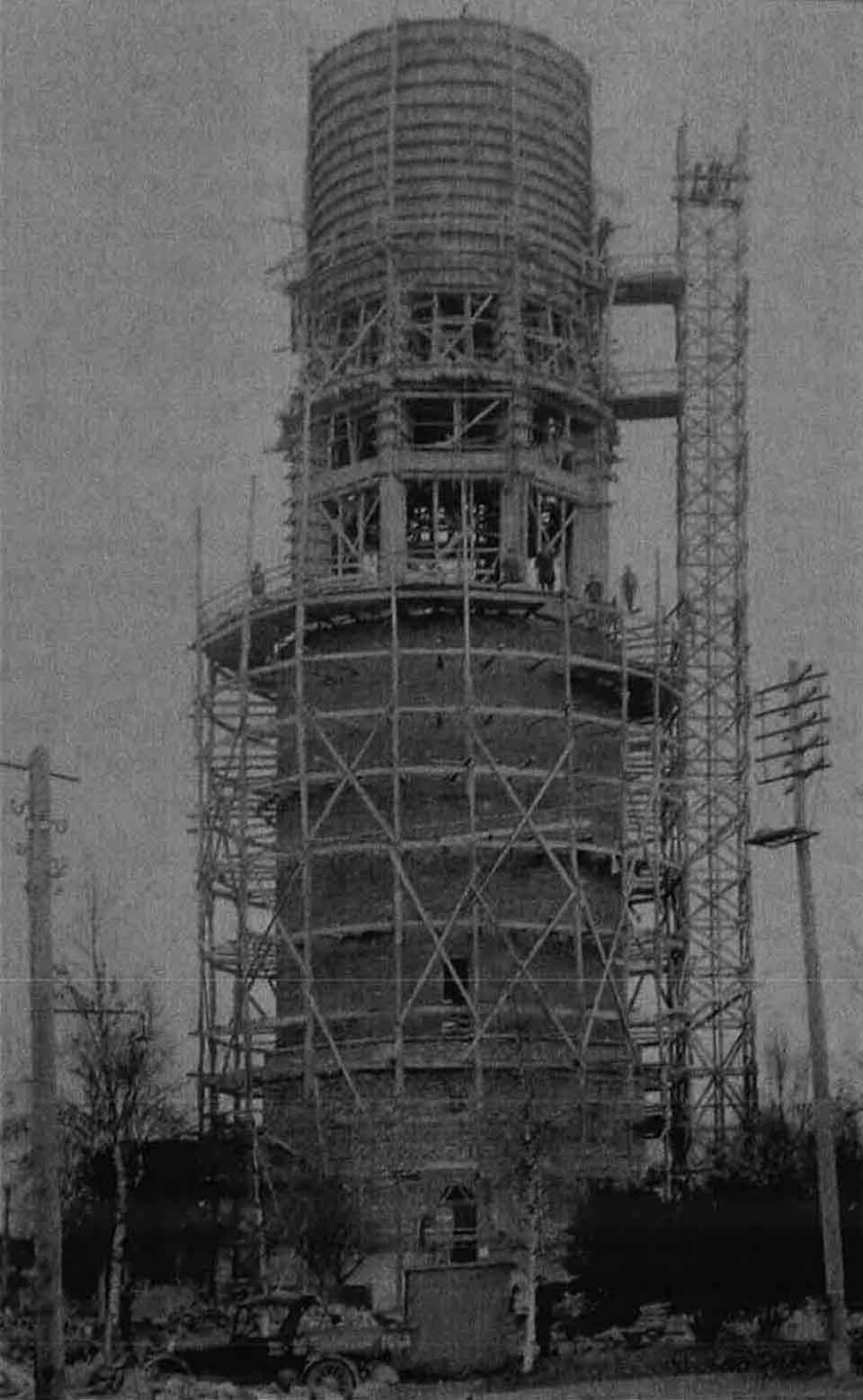 The water tower was built over 80 years ago and had become dilapidated. The tower was designed by the architect Lars Sonck, perhaps the best-known Finnish architect of the national romantic period. Many different kinds of buildings designed by Lars Sonck were built in the 1930s–40s, but even though Sonck created seven different designs for water towers, only three of them were ever built. In addition to Pietarsaari, Sonck's water towers can be found in Rauma and Hyvinkää.

The idea of renovating the water tower had been under way for a long time and, at the end of 2012, preparations were started and a renovation report was ordered from the engineering office IdeaStructura Oy. At the end of 2013 when the budget for the City of Pietarsaari was being drawn up, the decision to renovate the water tower was made.

The 84-year-old tower in Pietarsaari was cast-in-situ on a hill. There are ring beams around the ferroconcrete columns, supporting a water tank of 500 cubic metres and stiffening the brick walls built on site. The bricks were imported from Poland nearly 90 years ago, and they have weathered the wind and the snow rather well. 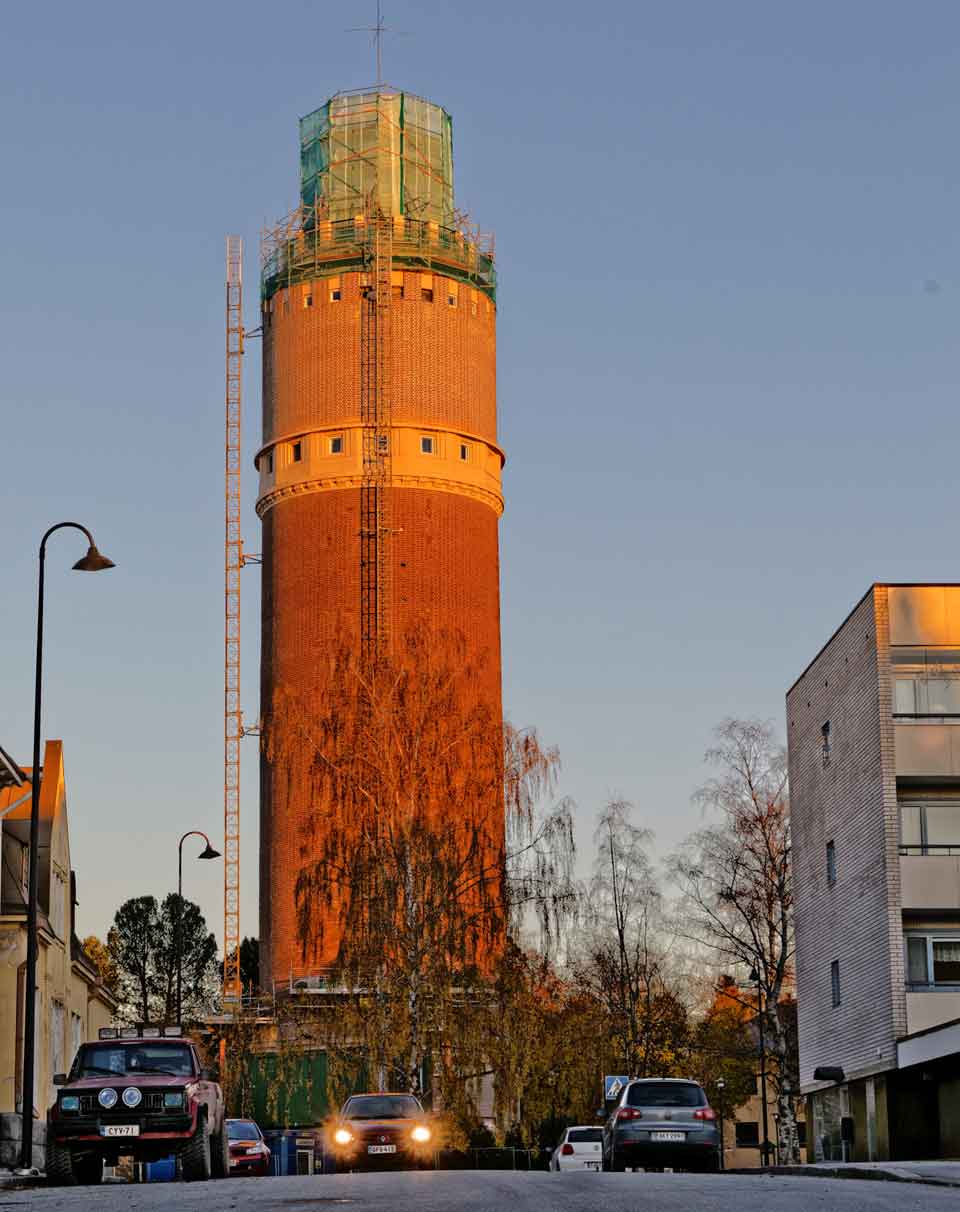 The construction company Rakennusliike A. Salonen from Kokkola is responsible for the renovation. The work began in May–June. Asko Reinikainen acted as site manager at the construction site.

Everything has worked out great with Ramirent, and I'd give the highest grades to Marko Nissinen at Ramirent in Kokkola, says Reinikainen.

After the water tank was emptied, it was found to be in a much better condition than expected.

Mast climbers instead of scaffolding 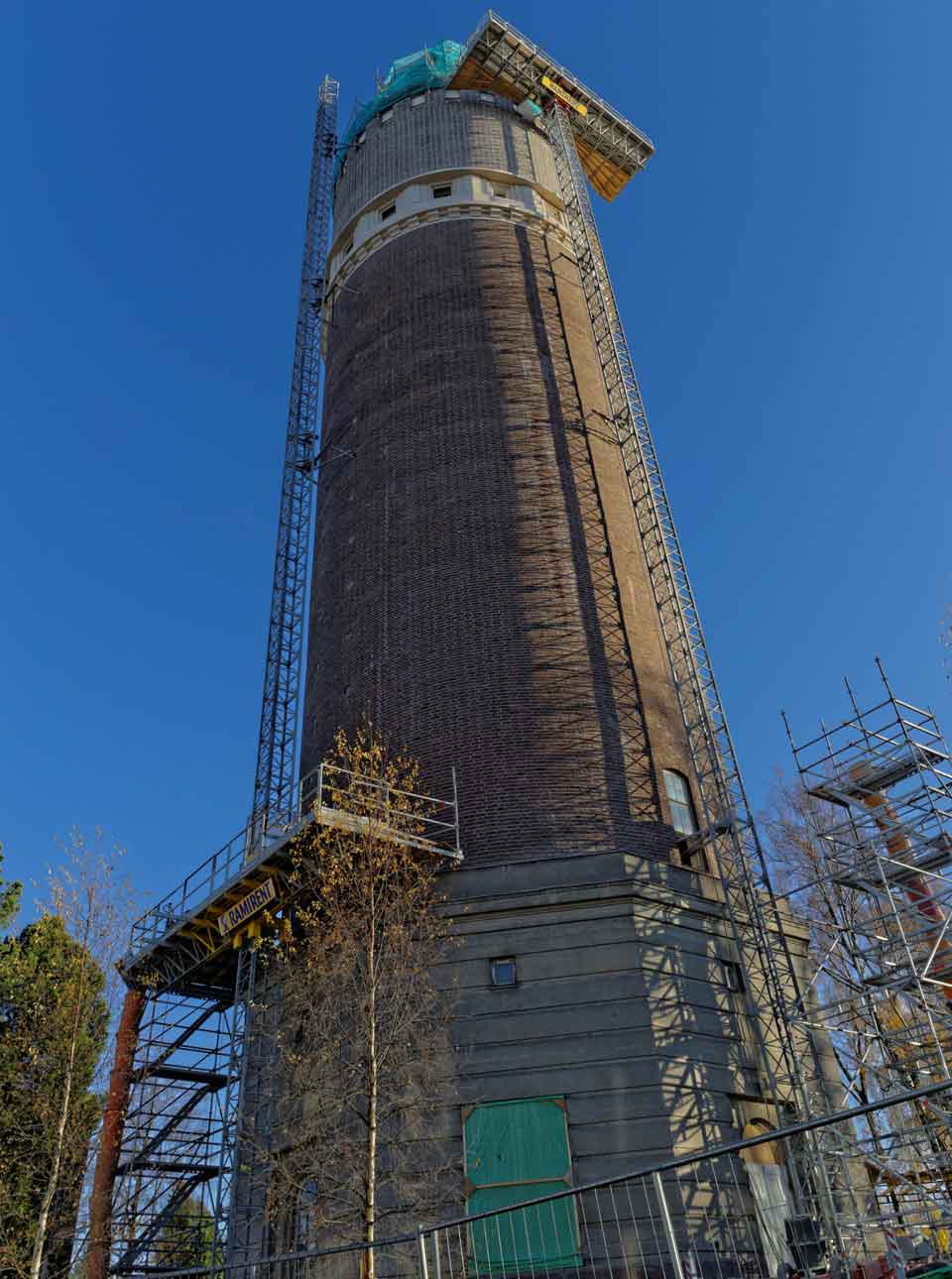 The original plan was to use scaffolding to repair the tower, but because the site manager at the construction site had had good experiences with mast climbers, the scaffolding was exchanged for two SC5000 mast climbing work platforms.

This measure saved an estimated two months of time and avoided the need to work in mid-winter. It is likely that schedules would have failed, if scaffolding had been used.>

When asked about why the decision to use mast climbers was made, Reinikainen answered:

There were many reasons, and the most important was occupational safety. Mast climbers have an excellent feature: the working height can be adjusted precisely, which was especially important in the chipping and drilling work. In addition, by using extensions the work platform could be adjusted to match the outer radius of the tower exactly.

Inside the tower, the water tank made of ferroconcrete was inspected and resurfaced. The pipes were inspected using a robotic camera to assess the need for repairs. 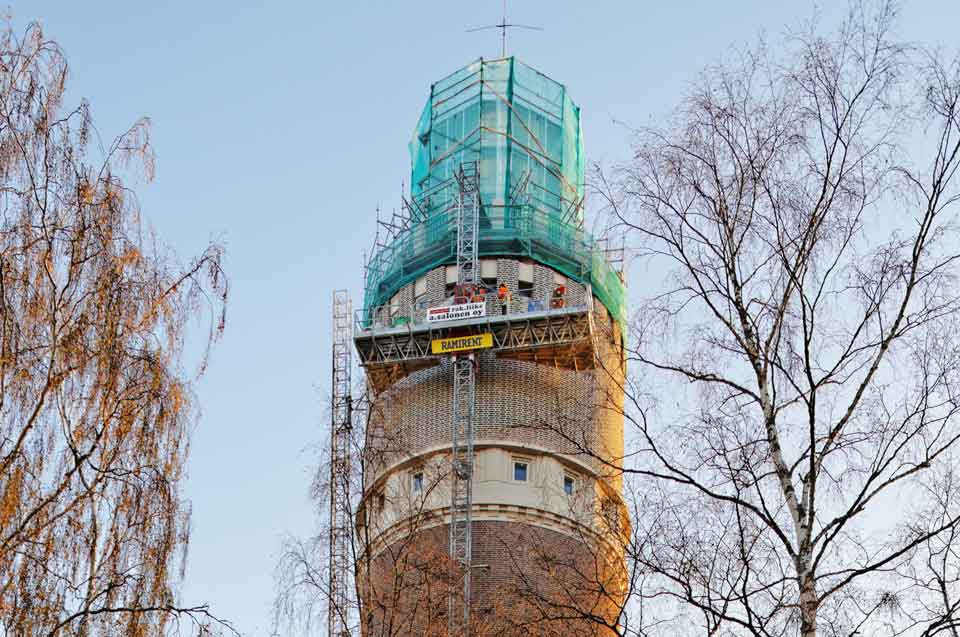 Mast climbers were used in a variety of ways in renovating the Pietarsaari water tower: removing construction waste, transporting materials up and down, removing the material inside the tank, and surfacing the tank (the mixers and bags were on the work platform).

Of course, the mast climbers were also used in the exterior work: masonry, removal and installation of the columns, grouting, removal of windows and glass bricks, as well as the removal and construction of the steel roof.

The work was organised in shifts so that one machine was used for exterior work while the other was used for the interior.

The upper section of the façade, which had been exposed to the weather, needed renovating. The roof and window flashing had to be replaced too. In addition, the water tank had to be cleaned and surfaced and the pipes had to be checked.

During the very thorough renovation, the damaged doors, windows, concrete columns, railing structures and the bricks and seams in bad condition on the façade were repaired or replaced, and the steel roof was replaced. 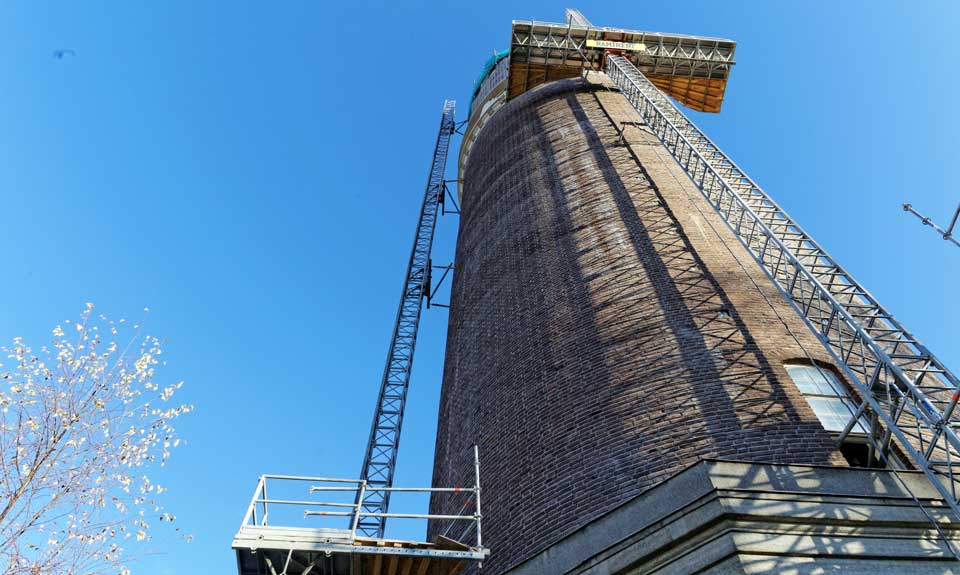 Regarding the usefulness of mast climbers in the renovation, Asko Reinikainen says:

It increased efficiency by a great deal in the exterior work. The machine was a great help in the work done on the interior of the tank. The mortar stations and bags could be taken up and the pumping could be done easily straight from the work platform. In the same way, the quality of work could be assessed easily on the work platform, Reinikainen adds.

But there were also unforeseen issues:

Because the tower is narrower at the top, the work platform had to be fitted to the upper section, and the work on the lower section had to be done using scissor lifts.

The decision to use mast climbers was made after the final calculation phase when the contract negotiations were started. According to the estimate of Rakennusliike A. Salonen, the time saved compared to the use of scaffolding was two months. Two days were needed to move the mast climbers. They were only moved once.

When talking about occupational safety, Reinikainen touches wood and says:

There have been 0 workplace accidents at this site!

The mast climbers played their own part in it. At the construction site, occupational safety has been issue number one at the site meetings. Everyone had their own personal harness and wore it at all times.