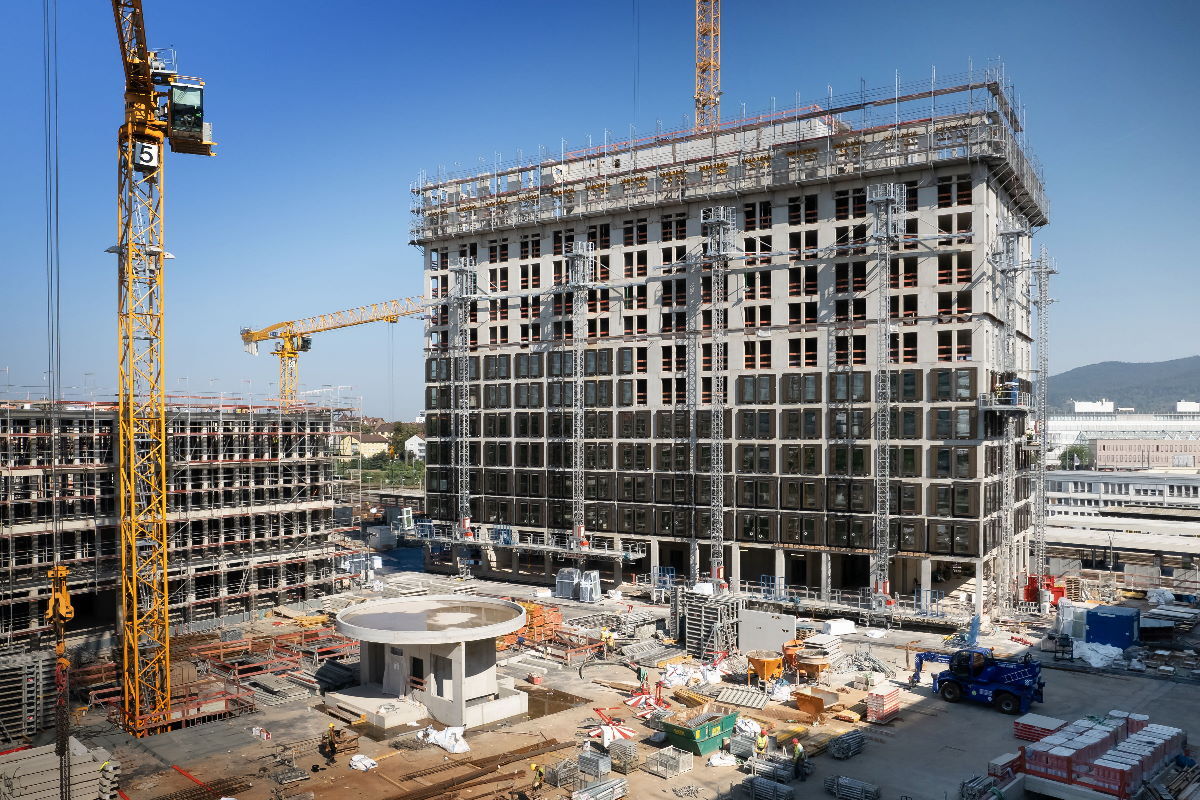 Around Heidelberg Europlatz main building, Zech had twelve Scanclimber SC8000 mast climbers with glide rails helping in a demanding window and facade element installation. The Zech installers fixed the elements from the mast climbers and used the glide rails to position the heavy window elements accurately.

A new city district of 116 hectares is growing on an abandoned area of a former freight yard in Heidelberg, Germany. The City of Heidelberg wants to transform this area into a neighbourhood considering multiple aspects of environmental protection. Heidelberg City's idea is to create and prove the feasibility of high-energy-efficient buildings and a sustainable energy supply. The builders must construct all facilities in Bahnstadt following the Passive House Standard.

Five thousand citizens will find a place to live, and 7,000 new jobs will be created in the Bahnstad area. The development started in the year 2008 and is scheduled for completion in 2022.

Today, Heidelberg City has sold most of the area, and most residential buildings have been constructed.

One of the developments is the Bahnstad Central area, where Gustav-Zech-Stiftung from Bremen, Germany, realizes six buildings. Construction works of the new "Bahnstadt "central area at Heidelberg's Main Station started in October 2019.

The new urban quarter, Europaplaz, between the central train station and the planned congress center on the Czernyring will mix different uses: A four-star plus hotel with over 300 rooms, a residential building with 100 rental apartments, and other facilities for offices and administration. Under the plaza, there is a partially public parking garage for 1600 bicycles and 750 cars. Currently, the construction site is in a skeleton state, and the facade works are progressing. After a total of three years of construction, Gustav-Zech-Stiftung will complete the 300 million project in 2022.

In the heart of the area, Zech company is finishing the tallest building in Bahnstadt, Europalatz 1 building, with 13 floors and 3200m2. The building is going to be 4-star-superior ATLANTIC Hotel with 310 rooms and a spa area.

In the summer of September 2021, building works progressed well, and Zech company installed windows. Later, in the autumn, they will install stone cladding on the walls.

Window and cladding elements were so big and heavy that Zech could not install windows from inside; thus, they needed a solution from outside. The crane use was not possible because of the very constrained capacity of the cranes.

After several consultations and discussions with different vendors and manufacturers, Zech decided to take Scanclimber mast climbers with glide rail add-ons for work.

Mast Climber Use in Window installation and Wall Cladding

Around the building, there were twelve units of SC8000 mast climbers, two single mast units, and five twin mast units. All mast climbers have glide rail add-ons installed. The glide rail height is adjustable since it can be pushed up or lowered on top of the mast climber. Each of the glide rails carries two gliders with a Minifor wire rope hoist on its rail. On the twin mast platform, there are altogether four gliders and wire rope hoists on the glide rails. Each glider can have a payload of 600 kg or 1000 kg with a short rail. Thus technically, 24 gliders and installation teams could work on the facade at the same time.

How the Glide Rails Are Used for Window Installation

The installers take the load of window elements, travel up with two sets of 5-6 windows on the platform. Then they start the installation of the lower window brackets. Once brackets are installed, they raise the window with the help of a glide rail running wire rope hoist and lower it to an accurate position on the lower brackets. The platform is then traversed up to the correct assembly level. In that position, workers install upper brackets and fasten the window element to that.

As an addition to the glide rails and Minifor wire rope hoist, all the platforms have a front side extension of 0,30 m and 1,00 m installed. The mast climber distance to the building had to be increased since there was a gap between the building shell and the floor slab, "Betoniergasse." The gap was challenging for the use of the Glide rails too. Glide rails had to be mounted on cantilevers to get close enough to the building to avoid pull during the window installation,

Mast climber's material and people transportation capacity reduced the need to use the constrained crane and the transport platform. And so, the windows and the natural stone installers could work entirely independently.

Zech chose mast climbers over scaffolding because all-around console scaffolding would also have led to additional waiting times for façade installation. Due to the element size and weight, other aids would have been required to swivel the facade parts under the scaffolding.

Commercially available standard monorails could only support only one hoist that could work with their wingspan. In this case, since the Glide rail can also make considerable lengths on a single-mast platform, four wire rope hoists could be used here simultaneously.

Now the facade elements could also be mounted at such a distance. Zech could have used only one hoist with a commercially available monorail in the twin-mast version due to the wingspan. However, since the Scanclimber glide rail can make considerable lengths as a single-mast platform, four wire rope hoists per twin-mast platform could be used simultaneously. Depending on the cantilever length, the load capacity is between 600 – 1000 kg minus 100 kg weight of the hoist.

A final word about the window installation with mast climbers

Zech company is happy with the solution for window installation. Site manager Mr Messerschmidt stated that:

These machines saved a lot of time and trouble. In a big construction site like this, the crane capacity is always limited, but now we did not need them for window installation at all. Also, the installation was very productive and fast. And the installers had good view and height always on what they did.