Scanclimber by Tractel's industrial hoists are used in many different industrial settings such as mines, storage silos, power plants and shipyards.
Webmaster 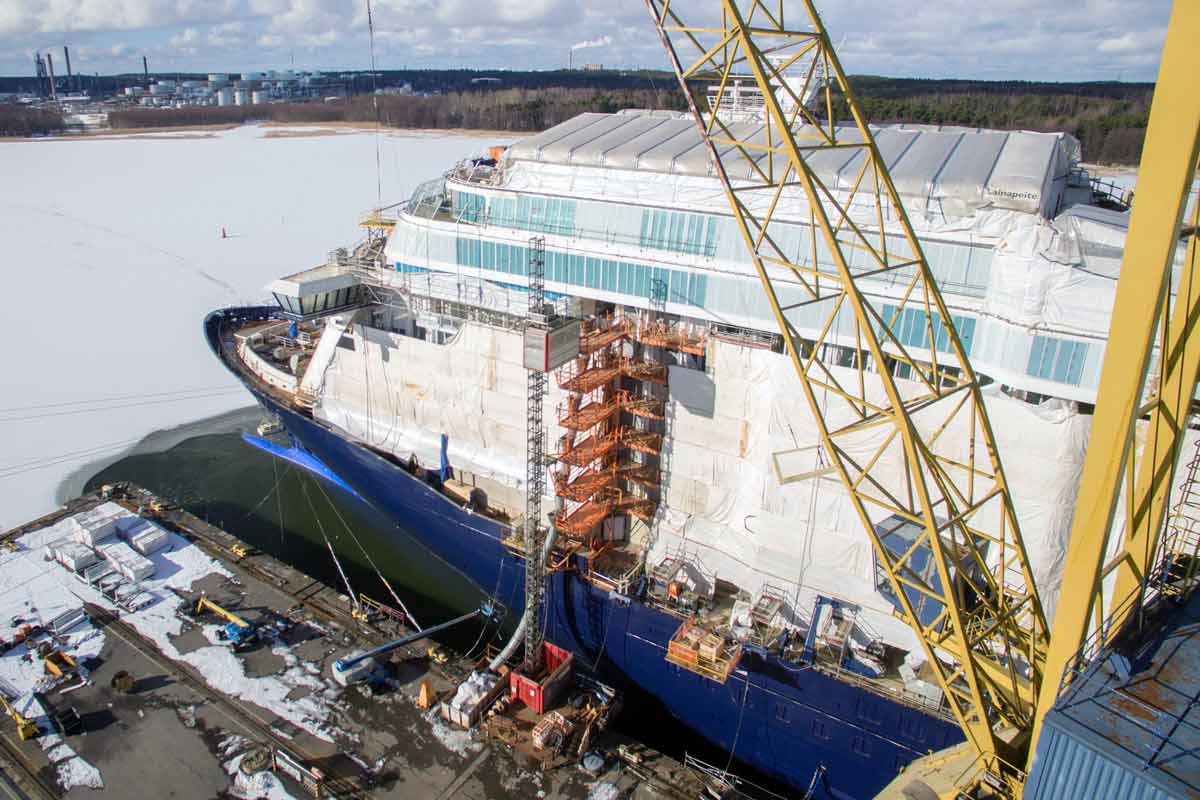 Scanclimber hoists played an important role in building the giant luxury cruiseliner, Mein Schiff 5, at Meyer shipyard in Turku. Meyer Turku is one of the leading shipyards in Europe, and part of German-based Meyer Werft. Meyer Turku specializes in building cruise ships and other passenger vessels. It has a long history in shipbuilding, dating back to 1737, when the yard in Turku started. Mayer Werf has built more than 1300 vessels over the years. 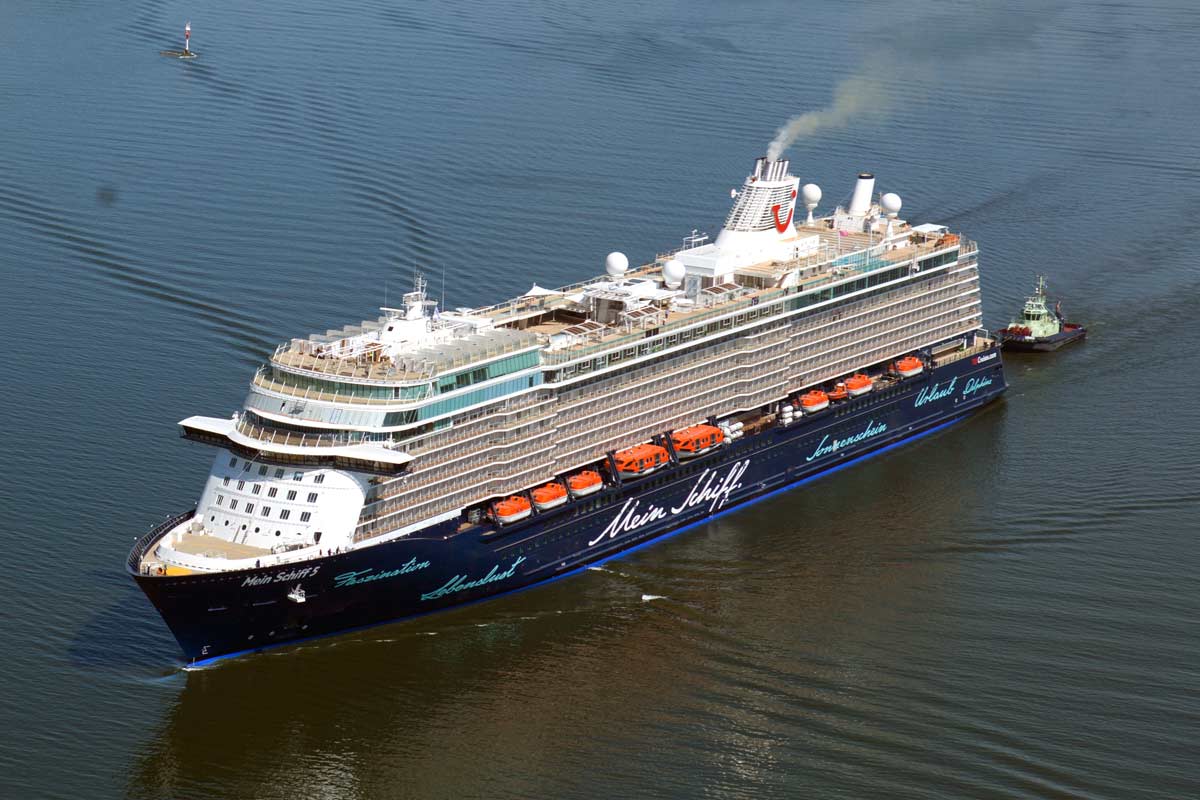 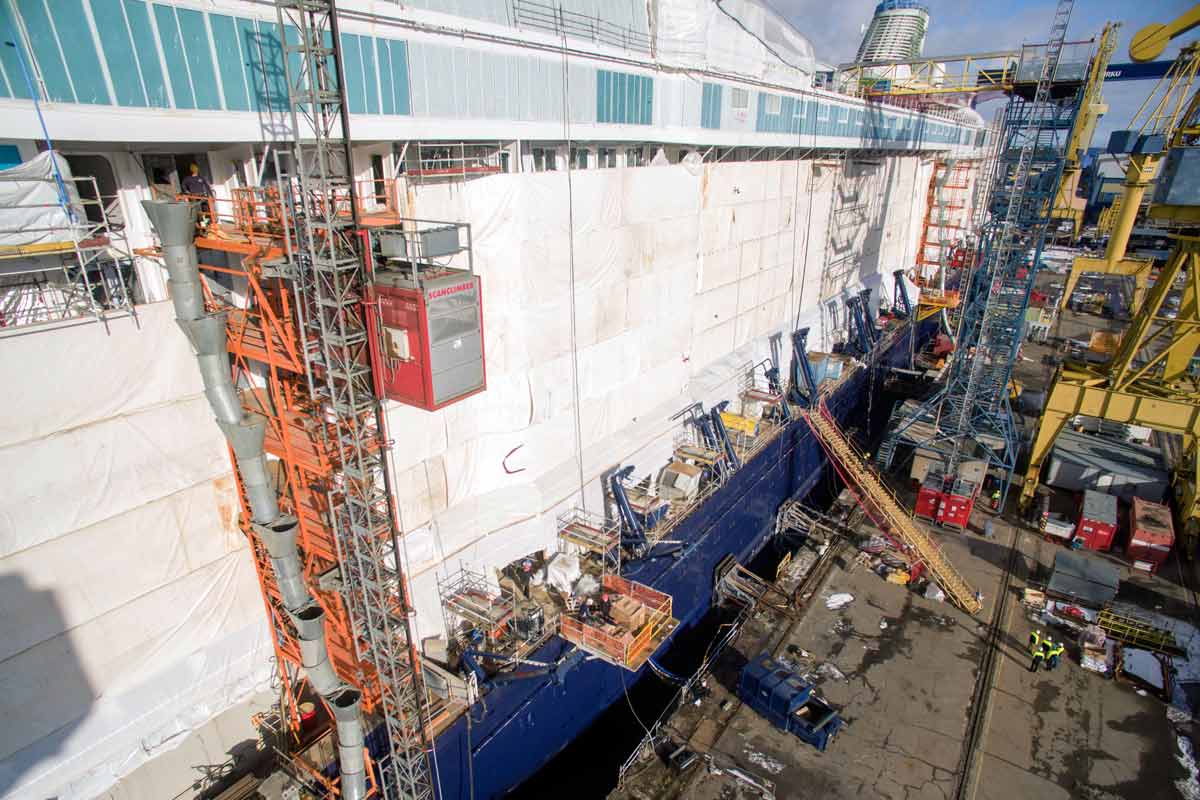 During the construction time a lot of material and personnel had to be transported up to the vessel’s 15 decks for inside finishing work. A crane could do some of the work but it was slow and could not transport personnel vertically. The challenge in this case was to deploy vertical transportation outside the ship, so that it would not interfer with the tower crane movement alongside the vessel.

Finally the viable alternatives that the rental company, Cramo, offered to Mayer Turku were reduced to one: Scanclimber Wega construction hoists.

The construction hoists occupied very limited space on the site and provided an efficient way to transport material and personnel to and from the vessel. The landing levels for hoists were deployed in such a way that material transportation was possible to all 15 decks of the ship. 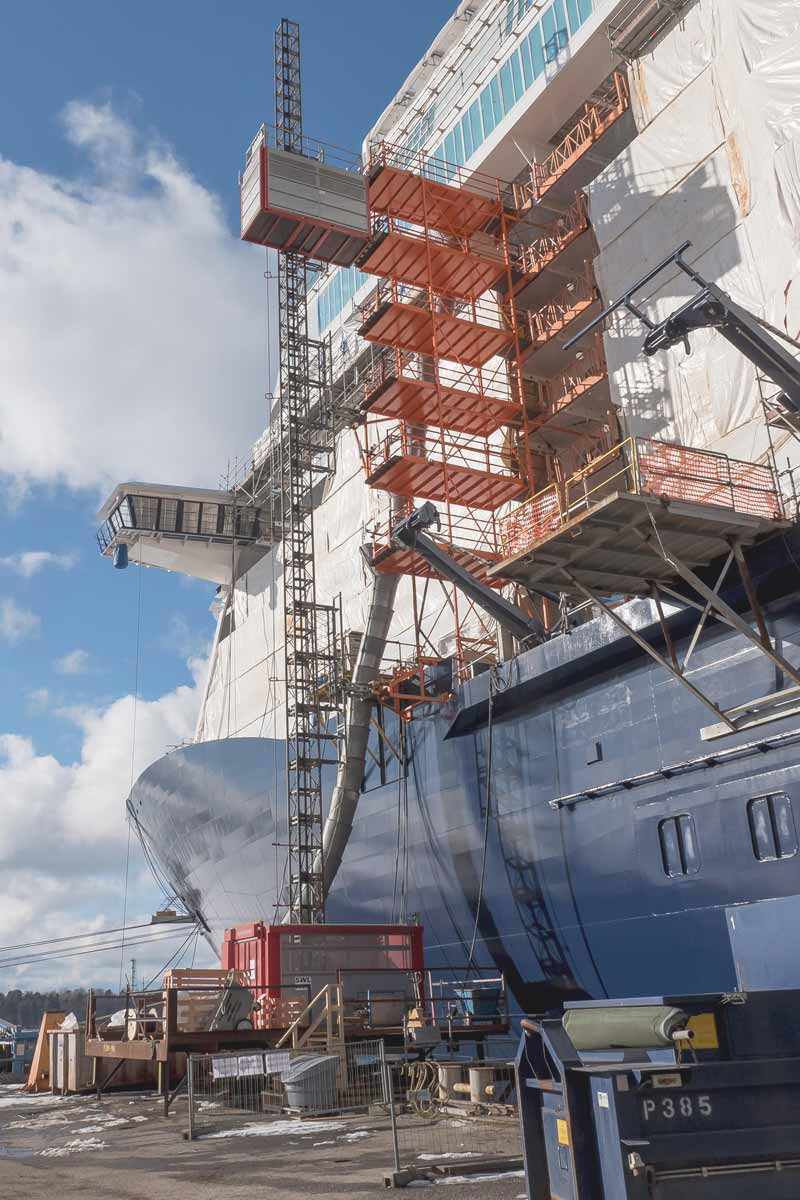 The ground station for the SC1837 hoist differed from the standard version. The hoist was bolted on to a strong wooden foundation half a meter above ground level. Additionally, the hoist was equipped with both a front door and an additional wider door on the side. This enabled optimal use of the hoist. More material could transported to the vessel and back because the hoist was accessible from two sides. 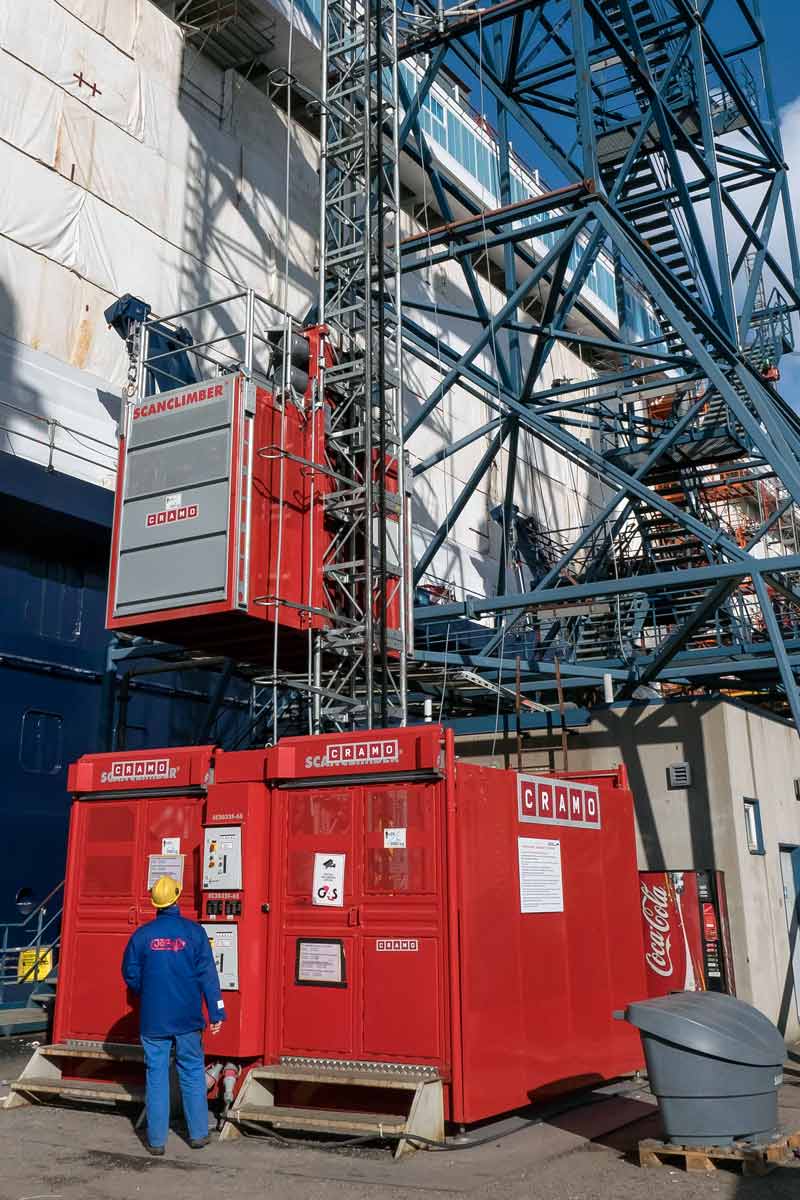 The twin SC2032F hoist was mounted on a normal concrete ground foundation. The other single hoist SC1837-65 was also mounted on a ground station and was equipped with a front door and an additional back door. 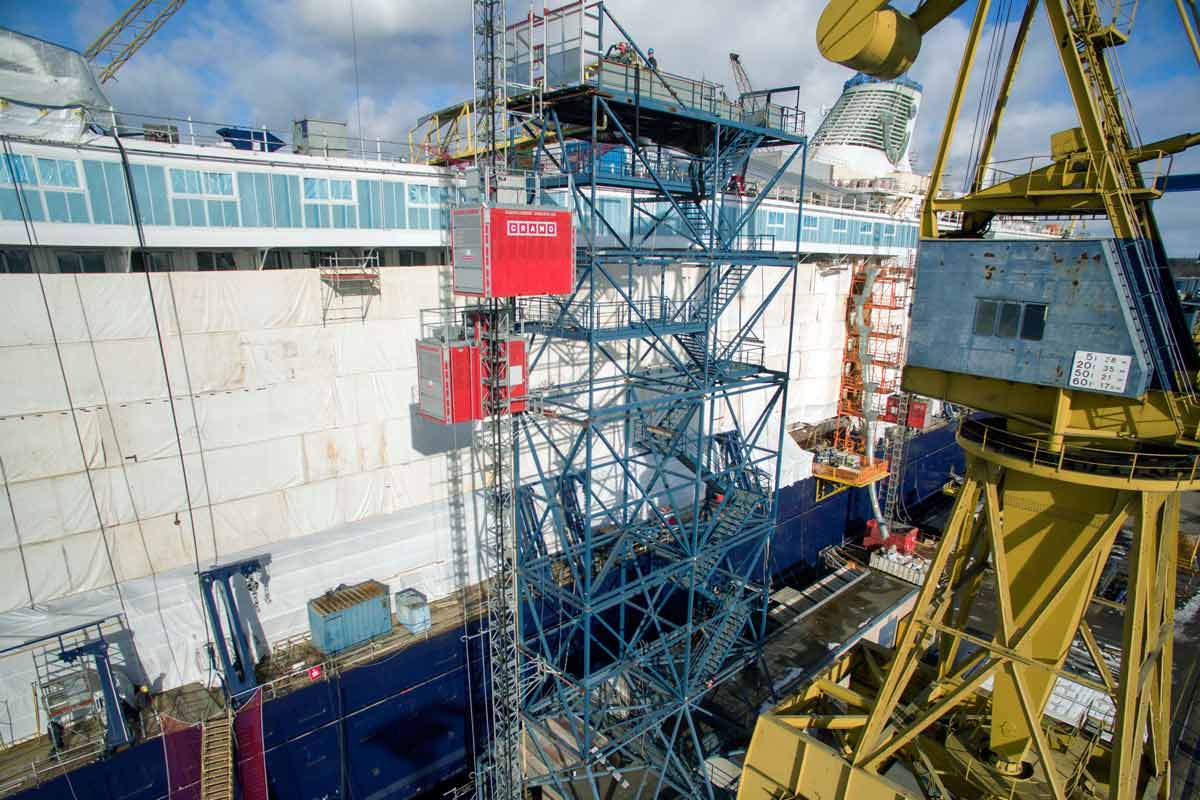 The landing stations for both single SC1837’s were on 6 levels, each covering all 15 decks, whereas the twin SC2032-65 hoist had only one landing station on top of the vessel.

The Mein Schiff 5 was delivered 11 days ahead of schedule. Using several hoists in a versatile configuration was one factor contributing to the timely completion of the vessel. Additionally, the configuration of the hoists increased efficiency and work quality. Having separate hoists, both at the front and rear, made balanced distribution of materials to the decks possible. The twin hoist helped to achieve fast access with a high payload capacity to the top of the ship.

Easy access to front, center and rear parts of the ship improved the rate of work done per hour and accelerated the performance of the whole ship building project.